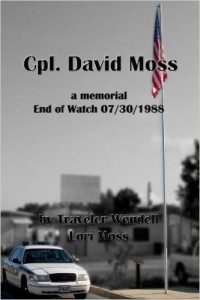 On July 30th, 1988; Williston Police Corporal David Moss was shot and killed while investigating what turned out to be a stolen car. Corporal Moss returned fire and killed his assailant. In the end, he did his job to the best of his abilities and maybe that’s why so many people in the area see him as such a hero. He accomplished everything he had been trained to do except going home at the end of his shift.

David’s widow and I endeavored to create a “memorial in print”, for a Police Officer that sacrificed his life for his community. Our hope was that we could find a balance between the cold hard facts of a murder, and the personal side of a cop who cared tremendously about others and just wanted to be the best cop he could be.

I think we were both surprised by how helpful and supportive most of those who knew and loved David were. They reached back into their memories and opened doors into places they’d long since sealed away. They shared memories of what, for some, was one of the worst periods in their lives. Most did this readily, in a thoughtful and caring way that made writing this book like a guided journey into the past.